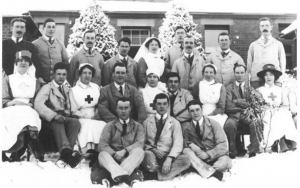 The staff of Kington’s Red Cross Hospital with some of the recuperating patients treated there.

During the First World War the Red Cross ran auxiliary hospitals and convalescent homes. As temporary facilities for wounded servicemen they provided a vital provision for sick and wounded servicemen. The Red Cross searched for suitable properties before hostilities started that could be used as temporary hospitals if war broke out. In Kington, Kingswood Hall was selected. Kingswood Hall was the building of the Kington Union Workhouse and as such was fitted with an infirmary and had room for 40 inmates or patients.

The hospital was opened in 1915, with Dr Winter Dryland as Commandant and Medical Officer. The hospital received its first patients on 18th March 1915 with the arrival of 18 servicemen. With exception of a few weeks when the hospital was closed in the autumn of 1916, the hospital was occupied continuously until the 4th February 1919. Dr Dryland joined the Royal Army Medical Corps in May 1915 and was succeeded by Dr Lazenby
as Commandant and M.O. until August 1915, when Miss Greenly took over the Commandantship. Dr Lazenby remained as Medical officer until the return of Dr Dryland from military service in 1916. The photographs above and below also show the members of Voluntary Aid Detachment (VAD) No.X composed primarily of local women volunteers. Some 416 servicemen were treated by the staff at Kington Red Cross Hospital between 1915 and 1919.

Kington’s Women respond to the call for nurses 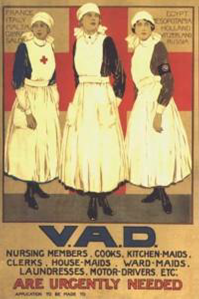 Perhaps posters like that shown above appeared on Walls in Kington and helped to inspire women to volunteer. Most of the volunteer nurses at the Kington Red Cross Hospital would have been too young or too old to work in a military hospital, perhaps unable to leave their families to work away. Kington’s VADs had to pass exams to receive their first aid and home nursing certificates. Other work at Kington Red Cross Hospital would have included paid work like that as a cook. Dr Dryland as the local doctor also volunteered to work at the hospitals and it was only in 1917 that the War Office recognised that their efforts deserved payment. 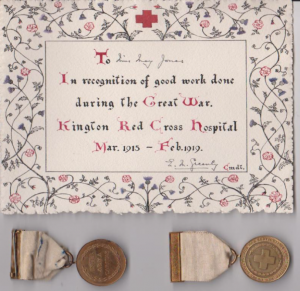 Certificates and medals awarded to May Jones for her service as a VAD nurse at Kington Red Cross Hospital.

The patients arriving at Kington’s Red Cross Hospital would not have had life-threatening injuries and tended to need time to convalesce. Generally, servicemen preferred auxiliary hospitals like that in Kington to the military hospitals as the discipline was not as strict, conditions were less crowded and the surroundings were more homely. Certainly, the photograph showing smiling patients suggested that the recuperating servicemen were
happy with their time at Kington Red Cross Hospital. The sight of Kington’s wartime patients dressed in their blue uniforms must have been a common one in Kington between 1915 and 1919.

Kington also had its own Red Cross working party. They organised the supply of hospital clothing including socks, shirts, blankets and belts for soldiers. They also made essential hospital equipment such as bandages, splints, swabs and clothing. The diagram below from ‘Woman’s Weekly’ shows some of the garments made by the Kington Working Party to supply Kington’s Red Cross Hospital. 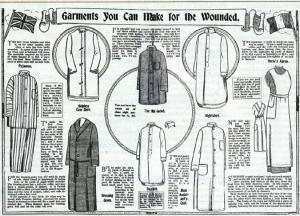 Items were sent by the Kington Working Party usually directly to soldiers and sailors or to soldiers in auxiliary hospitals at home and abroad. 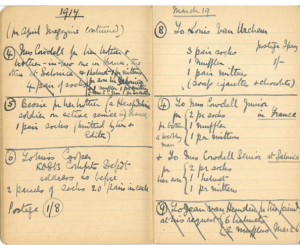 Pages from the Kington Red Cross Working Group records. The records
were kept by Mrs Banks of Ridgebourne.
Source by kind permission of W.L. Banks and the Hergest Trust Archive.